The Wolf's Den: Book Two of The Somber Wolves Saga by Matt Honorato 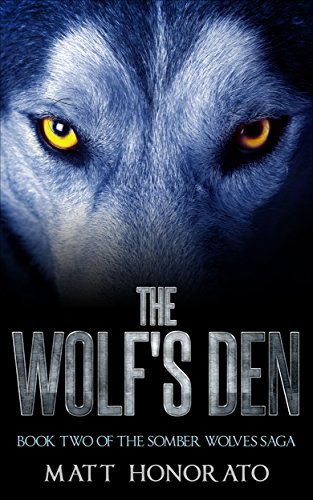 Death surrounds us and to fear it is wise.

However, what we should fear the most are the bringers of death.

The creatures living in the shadows, lurking the corners and waiting for an opportune time to strike.

Nobody knew they were there, plotting and scheming in the dark. They remained hidden until the body count began rising and something had to be done. MORE >

A month after a deathmatch in Blackford, life finally seems to be returning to normal for Curaleon as the fluff of snow filled the streets of Chanocia City with the promise of a calm and relaxing winterA promise that would be fulfilled if not for a shadow, lurking in the alleys of the capitalA death omen of legend with different plans for the future of the kingdomCuraleon will need the aid of a new and powerful ally this time, but will it be enough to save Chanocia from the claws of evil? Danger might be closer than you think

The Wolf's Den is the second book in the ongoing series “The Somber Wolves Saga.”

Book One: The Lone Ranger

Book Three: A Breeze of Summer

The Lone Ranger: Book One of the Somber Wolves Saga

A Breeze of Summer: Book Three of The Somber Wolves Saga